Since 2007, fourth and fifth graders (hereafter, researchers) from a local elementary school have been collaborating with CPRAT, using participatory action research to create positive changes in their school. Through artistic expression and discussions around community, education and diversity, researchers created the “We Are Powerful” mural during the summer of 2009. Additional mural support was provided by art4change, housed at Gavilan College. The mural is an example of the changes these researchers are making in their school and community. Change 4 Good researchers then assessed the “We Are Powerful” mural to see if it addressed their original problem definition. They determined that other students did not feel connected to the mural so they conducted focus groups to incorporate student, school staff, and community stories about making a change in the community. They designed a mural based on these stories and in the summer of 2012, they painted the mural “Maplewood Stories.” The researchers then surveyed the school and community about that mural and learned that teachers felt least connected to the image representing “struggle.” This was so important to the researchers that they decided to conduct more focus groups asking about a more unifying theme: people’s hopes and dreams for the school and the community. Over the summer of 2015, the researchers painted the mural “Hopes and Dreams of the Maplewood Community,” which was based on responses from a third set of focus groups. In 2016 the researchers surveyed the school and community to learn if the mural represented the community’s hopes and dreams. Researchers continue to meet once a week to identify issues in their school and community as they determine what to research and act upon.

Mural #3: Hopes and Dreams of the Maplewood Community

Mural #1: We are Powerful 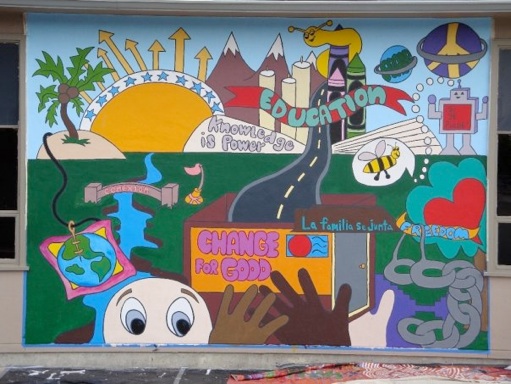 “We made the mural to stand for who we all are and what is important to us and our community. We hope to be able to do more things like this.”- 5th grade student

In 2007, another group of students in the after-school program did a research project on what their hopes and dreams were for their school. One of the things their research uncovered was that the school was not being treated very well. Examples of this were littering and writing on walls. When the students did more research, they concluded that one of the reasons this was happening was because not all students felt like they were an important part of the school.

One of their hopes was that all students would feel like they belong at the school. They decided to create a mural to help students feel that they are an important part of the school. In the mural, the students wanted to show some of the things that kids and families in their community think are important, like making positive changes in their school and community, as well as the importance of diversity, community, and education. At the beginning of the 2008-09 school year, the students were anxious to begin painting the mural, but after they made a fieldtrip to UCSC to research murals, they learned that murals are a way to tell a story through symbols.

The students wanted the mural to be for the entire school, so they worked to make sure that all the students had a chance to say what they thought was important to them. The group placed a big piece of paper outside during lunch time and asked students to draw pictures or write down things they really liked or wanted to incorporate in the mural. Additionally, they surveyed older students. Finally, through photovoice, they took pictures of things that were meaningful for them in their community.

The students studied all the photographs and drawn pictures, and their collected questionnaires, and determined that the main ideas were community, family and friends, education, diversity, and peace. With these themes in mind, they decided to work on making a mural to represent these main ideas. Over the summer of 2009, they made the mural, as part a summer program. To design a sketch of what the mural would look like, students made collages with pictures from magazines that reminded them of the themes, drew pictures on their sketchpads, and worked with pastels to design symbols to represent the themes they had identified.

Once all the symbols were drawn, Jesica Fernandez, a graduate student CPRAT member, helped the students put the themes together into one big picture. Several drafts of the sketch were presented to the principal, who then sought approval of the final sketch from the superintendent. After the sketch was approved and a visible wall at their school was selected, the students were able to begin the mural.

All the students were actively involved in the making of the mural. With the help and guidance of undergraduate CPRAT member, Brooke Davidson, graduate student CPRAT members Jesica Fernandez and Danielle Kohfeldt, Professor Gina Langhout, and a critical mural collaborator, r2row Rosette, the students were successful in creating the “We Are Powerful” mural.

Chains: “I designed the chains on the mural to stand for the history of slavery. They connect to the word FREEDOM to show that we have made a lot of progress, but that we also need to remember what has happened and work on the problems that we still have even though slavery is over” (female, 5th grader).

Robot: “This represents the past and changes we make for the future. It says ‘Si Se Puede,’ and that means ‘yes we can’ because everyone can help make changes” (male, 5th grader).

Box: “It stands for ‘thinking outside of the box!’ and making BIG things come from something small” (female, 5th grader).

Bridge: “The bridge that connects the two areas of the mural is to show that a lot of people who come to the United States want the opportunity for education. It says CONEXIÓN, which means ‘connection’ to show that even though people come from many different places they are still connected to their culture.”

Path: “This is a path that leads to the crayons, which stand for the journey from home to education. All of the symbols around the path are things that make us who we are. We take these things with us on our journey to the future.”

All of the symbols have an important meaning for each of the students. Together the mural stands for community, history, future, nature, education, family and diversity. These themes come together in their lives and they wanted to express and communicate them through the mural.

The students dedicated the mural to their community, their school, students, families, teachers, principal, and staff, as well as those who made this possible. The students titled the mural, “We Are Powerful” because they feel that they all have the power to make change for good. Finally, they created this mural because they want everyone to feel that they belong at their school and within their community.